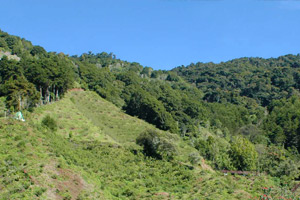 An article published in National Geographic reports on groundbreaking sighting of the bush dog.

Jan Schipper, a field conservation researcher with the Phoenix Zoo, was pleasantly astonished by the images captured from camera traps set up in Costa Rica’s Talamanca Mountains: the bush dog (Speothos venaticus). A short, stout carnivore, the bush dog, weighs in at about 10 pounds and is the size of a domestic house cat. What’s more, is that it’s the species is incredibly rare—until now the wild dog has not been definitively sighted north of Panama, at a high elevation of more than 4,900 ft.

The data recorded from the camera traps will aid scientists in learning more about this elusive canine. According to the National Geographic article, these cameras have been set up for 12 years and this is the first photograph they’ve gotten.

To see the camera trap photo of the bush dogs, visit the National Geographic article here.

WHAT WE KNOW ABOUT THE BUSH DOG

While there is still so much to learn about this under-documented species, researchers have been able to gain a few insights into this private creature.

Bush dogs inhabit forests ranging from southern Brazil to Panama; which is why their arrival in the Talamanca Mountains is rather surprising. Although shy in regards to human interaction, the breed is rather social, and almost always seen in pairs. They also form packs and establish home ranges for their family to hunt, mate, reproduce and travel within. What’s interesting is that although their size is comparable to that of a house cat, the size of their home range matches that of a puma; one study revealed a family of bush dogs occupying a home territory of more than 30 square miles.  The wild dog is nocturnal, hunts at night and burrows underground during the day—another factor that accounts for why we know so little about them.

THE FUTURE OF THE BUSH DOG IN COSTA RICA

Archaeological evidence shows that bush dogs are not native to Costa Rica, but immigrated to the country recently. When exactly they arrived and how long they will stay, are both questions that still need answering, however. One predictor of their longevity in the country will be the canine’s access to prey. Because the Talamanca Mountains are surrounded by sugarcane and coffee plantations—their primary prey armadillos and small rodents may not stick around. This poses a potential future problem for the bush dog.

The good news is:  they’re here now; in a country that where a quarter of the land is protected, the bush dogs have found a home in Costa Rica.