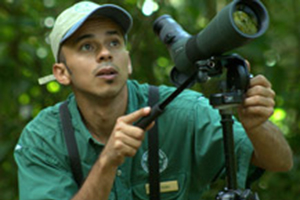 When he was 9 years old, Iván Castillo Gomez was bitten by a snake, the venomous “fer-the-lance”(terciopelo). Iván’s experience led him to study the nature around him and now, as Selva Verde’s head naturalist guide, he has created a series of interesting talks for all visitors – including snakes, frogs, migratory birds, and leaf-cutter ants. These can be requested at any time and are perfect for small groups.

“Frogs of Selva Verde”
In the case of amphibians, the country has about 192 species, being the anura order (frogs and toads) the most diverse, totaling 141 species. In this lecture we talk about how toads but especially frogs take advantage of all these particular conditions that Selva Verde provides to develop their life cycles, also based on their natural history we will describe the most representative species and families of our reserve and we will discuss about the role that Selva Verde plays through ecotourism in the conservation of species in the face of current threats such as global warming and habitat loss.

“Bird Migration - A Surviving History over the Costa Rican Skies”
Costa Rica is a biological bridge that joins the north and south of the American continent, reason why is favored by a great exchange of species between both Americas. An example of this is the case of the large number of birds that escape from the cold winter of their breeding grounds and venture in search of warmth and tropical food, that is how a number birds of North America establish their "winter homes" in this the Country, but a great majority continue their pilgrimage to specific places of South America. Where there are also some species that go northwards, with the purpose of nesting in conditions particularly suitable, that they will not find in the area of origin. Selva Verde’s rainforest reserve has a privileged position within the country, being on one of the main migratory routes of the continent; this can be easily noticed at the beginning of autumn with the ¨clouds¨ of raptors, as well as wrens, Orioles, tanagers and others that forage in the surroundings while they are heading south. So we have decided to make a general description of bird migration facts in order to understand in simple way, this fascinating phenomenon analyzing its migration strategy as well some challenges that could face during the journey.

“Leaf Cutter Ants”
This lecture was inspired because of the way this ants live and my curiosity went further, the result was wonderful to study this amazing insects. They are little that much that sometimes we step on they when we walk on the trails, but if we stop and observe this ants working very hard, cutting leaf fragments and transporting them to their nest, the different size of ants, their nest and some other details. The leaf cutter ant has developed a way to live together with a fungus, planting it and feeding on it. This symbiosis relationship is been taking place on earth since long time ago, if we stop and think about it, it is like humans way to produce food with crops. They produce their food thanks to their capacity to compost all the different plant material that becomes in a fungus garden like a “farmer”. The lecture introduces the guests in the crazy world of the leaf cutter ants, so talking about them in many aspects like when they reproduce, how they live and some more.

“Snakes and Production of Anti-venom in Costa Rica”
This lecture is about snakes in Costa Rica and at Selva Verde, my country is very rich in reptiles such as iguanas, caimans, turtle but most of them are snakes, close to 60% of the total reptiles in Costa Rica are snakes and most of these beautiful snakes are nom-venomous but that low percent is consider as deathly snakes because if you get bitten by one of these dangerous snakes, you will survive getting the anti-venom at the hospital to stop it. The lecture has the intention to educate people especially that in Costa Rica snakes could be so well camouflage, so when you do a hike in the forest is better to use hiking shoes or robber boots, a flashlight at night, all of these in order to avoid an accident with a snake. We also talk about how Costa Rica is a pioneer country in the antivenom production around the world. In the Clodomiro Picado institute thousands of anti-venom are produce every year and some of those bottles go to other countries like places in Africa to treat “mamba” bites.