Thirty years ago, rainforest stretched from Costa Rica’s Central Valley to the Atlantic coast.  Today this area is a patchwork of small fincas, agricultural plantations, and a handful of rainforest reserves.  Selva Verde is one of those reserves – protecting an important remnant of the forests that once blanketed the area. 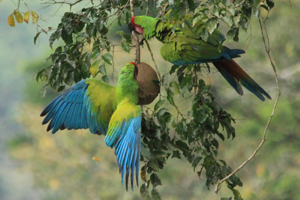 Great green Macau, Selva Verde LodgeIn order to maintain optimal levels of biodiversity within the reserve, Selva Verde is working with local conservation organizations such as the Sarapiquí Conservation Learning Center and the Centro Cientifico Tropical to create forested pathways between Selva Verde and other preserves in the area.  These pathways, known as biological corridors, will allow rainforest wildlife to migrate more freely and ensure a brighter future for the area’s biodiversity.

Selva Verde’s Rainforest Reserve has been identified as a critical piece of a much larger corridor initiative known as the Mesoamerican Biological Corridor (MBC).   The MBC is an international initiative that links critical habitats from southern Mexico to Panama in an effort to conserve biodiversity and promote sustainable development throughout this ecologically fragile region. 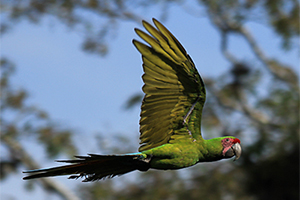 Great green MacauSelva Verde sits in the middle of the San Juan-La Selva section of the MBC and provides habitat for one of the corridor’s most endangered species – the Great Green Macaw.  Less than 200 of these birds can be found in Costa Rica.  The macaw’s very existence is tied to the Almendro tree – the bird’s preferred nesting and food source.  The wood of the Almendro is also a very desirable building material and has been extensively logged throughout Sarapiquí Valley.  Selva Verde’s reserve protects one of the largest Almendro trees in the region and macaws are frequently seen in and around the preserve.

Selva Verde is committed to working with local and regional conservation organizations to save Great Green Macaws and the Almendro trees - within our preserve and beyond our boundaries.    Protecting the Great Green Macaw’s habitat also protects habitat needed by many other rainforest birds, mammals, reptiles, amphibians, and plants – ensuring a future for rainforest biodiversity and for Selva Verde.

For more information and maps of the San Juan-La Selva Biological Corridor VISIT THIS WEBSITE.