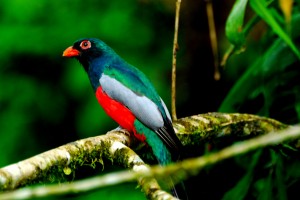 The slaty-tailed trogon (Trogon massena) is one of 40 species of trogons with similarly compact bodies, arboreal habits and colorful plumages. Most are sedate and characteristically perch upright, with the tail almost vertically downward. The flight is typically undulating, with brief spurts of rapid wing beats, and is silent. The birds perch in one location, rarely hopping or stepping from branch to branch; the feet are small and appropriate only for stationary perching.

They are among several trogon species that regularly occur at Selva Verde, often observed in clearings close to the guest lodgings and dining room, especially early in the morning. They are obligate frugivores, although they sometimes eat insects, and might even consume small lizards on occasion. They focus their foraging activities in the upper and middle levels of lowland forest, where they are especially fond of ficus and palm fruits. They often frequent the fig trees at Selva Verde.

They characteristically feed by sallying out from perches and delicately plucking fruit from the tips of twigs, usually without alighting, then return to a nearby perch.

These are mainly solitary birds, except during the breeding season. They tend to perch motionless for long periods, and finding them in thick foliage is often challenging. But, at times, they perch on exposed and usually vertical branches, in plain view. Otherwise, despite their striking colors, they are not easy to discover in the shadowy foliage where they typically occur. Their main call is a steady unmelodious barking, distinctly throaty and raspy; these birds are often heard before they are actually seen.

Slaty-tailed trogons are fairly common in much of Costa Rica; their main range extends from southeastern Mexico to Ecuador.

They nest at Selva Verde. Both members of pairs cooperatively excavate a nest chamber, at the end of an ascending tunnel, often located in the trunk of a decaying tree, wasp nest or epiphyte clump. The entrance to the nest is usually 8-50 feet above ground, and at Selva Verde, some nest as low as 15 feet above ground level. Females lay three eggs, which are incubated for about 18 days, by both parents in alternating shifts: female by night, male during the day. Young usually fledge in under 30 days.

Recent research confirms these trogons are important dispersers of forest seeds, some of which are regurgitated, some excreted, intact. In common with other frugivorous birds, their role in fruit-seed dissemination makes them important elements in the Costa Rican lowland forest.

These trogons tend to be quite tame and approachable, and they are often encountered only a few yards above the ground. The sexes are dichromatic; the males are much more colorful than the females. They are readily distinguished from the very similar lattice-tailed trogon by virtue of their orange beak; the beak of the latter species is yellow.