For decades now Selva Verde Lodge and Reserve (SVL) has supported and recognized the importance of scientific research and conservation of important ecosystems, including the rainforest it protects. Recently, the lodge has taken a more active role in facilitating research and conservation efforts by hosting researchers, developing workshops, and working with local biologists to design the blueprint for potential ongoing projects, with Selva Verde Reserve as home base. Marco Gasparoli of SVL has been the leading effort in the undertaking of this huge endeavor. We are excited to share the details concerning these ongoing projects with you, and are confident this is just the beginning—the potential for SVL’s growth in this arena is limitless. We invite you to follow along on this journey!

Gasparoli, the point person for SVL’s research project, has been working closely with Willy Pineda to devise a plan for research and conservation at SVL. The aim is to define the scope of the research, identify objectives, solidify goals and address potential difficulties that may arise. Pineda has created an initial project proposal outlining budget, general and specific objectives, and a work plan to carry out these objectives.

About our partner biologist:

A native of Costa Rica, Willy Pineda studied biology at the University of Costa Rica (UCR) and worked as an assistant in the Museum of Zoology. It was while working at the museum that Willy discovered his passion for mammalian studies. After completing his bachelor’s degree, he remained at UCR to complete a master’s degree in zoology. His graduate studies focused on the relationship of the wing morphology (size and shape) of Neotropical bats with their diet, feeding guilds, and foraging behavior. Since then, Willy has published several scientific papers, participated in research projects, consultant work and various teaching positions. Currently, he lives with his family in the verdant Caribbean Lowlands of Costa Rica, at Sarapiquí, and is working toward his Ph.D.

In our last issue, we wrote about Annabelle Mall B.Sc. an international post-graduate student who chose SVL as the site for her research internship. Over the years, the lodge has hosted a number of international students seeking to use Selva Verde as their filed site for carrying out specific initiatives. 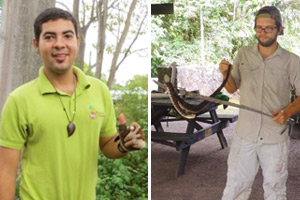 Currently SVL has two researchers working on-site, who have undertaken projects related to their specific fields:

Daniel Ramirez Arce B.S. (right) is a biologist with a degree from the National University of Costa Rica. His primary focus of study at is on the diversity of amphibians, reptiles and mammals and their relationship to the structure and composition of the tropical rainforest. Arce currently works and resides at Selva Verde from Friday-Sunday.

Alejandro Zuniga B.S. (left) is also a biologist with a degree from the National University of Costa Rica. His work at Selva Verde is focused on the structure and floristic composition of the Selva Verde rainforest. Zuniga works and resides as Selva Verde Monday-Wednesday.