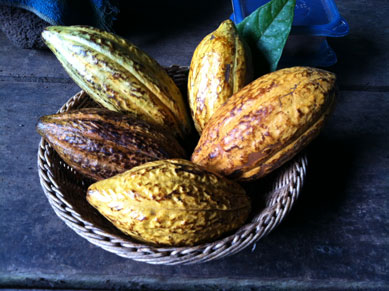 Chocolate, nature’s gift to sweet-lovers everywhere, comes from the beanlike seeds of cacao plants, which grow in abundance on the pacific inlands of Costa Rica. After an arresting halt in prosperity for nearly three decades, new breakthroughs in plant breeding show a potential comeback for cacao in Costa Rica.

Before the emigration of Europeans to the America’s, the region’s native people used chocolate as currency—more specifically cacao beans. The Incas, Aztec’s and Costa Rica’s Chorotega were wise to the plants value long before chocolate became mainstream. The Maya used the beans of cacao in beverages for rituals such as betrothal and marriage ceremonies—one of the first sited relations between chocolate and love.

By the 16th century news of the “food of the gods” spread from the New World back to Europe. Cocoa, the chocolate drink made from cacao seeds gained major status as a healthy, delicacy of the affluent. The first hot chocolate shop was opened in London, and soon after these shops began popping up all over England.

Throughout the 1700s, chocolate developed into a widespread phenomenon—countries everywhere were creating sweet treats made from cacao.

This chocolate craze proved lucrative for Caribbean countries like Costa Rica, whose tropical climate was ripe for the cultivation of cacao. And up until the 1970’s it was--cacao was a primary source of capital for Costa Rican farmers; the island was bursting with cacao plantations until farmers began to notice a fuzzy, white coating growing on and ultimately killing the crops.

The Downfall of Cacao

That white fuzzy fur adorning the cacao pods was identified as a fungus called Moniliophthora roreri or monilia for short. By the early 1980s the fungus spread around the country and Costan Rican export of cacao decline by 96%-- a blow the country has not yet recovered from.

Unfortunately most crops, and in this case cacao, are at consistent risk from plant pathogens and disease due in part to our tendency to cultivate only a narrow variety of strains with similar genetics and defects. Lack of genetic diversity for the purpose of mass production makes crops more susceptible to death from disease.

In an interview with the New York Times, Wilbert Phillips-Mora head of the Cacao Genetic Improvement Program at the Tropical Agricultural Research and Higher Education Center (CATIE) stated that most strains of cacao produced globally come from a minute set of clones chosen in the forties.

It is estimated that we consume more than 4.5 billion tons of cacao derived products annually—and with China and India’s growing affinity for chocolate treats that number will continue to climb. Faced with the real possibility of a future chocolate shortage, Dr. Phillips-Mora’swork seeks to solve the cacao-disease problem and hopefully restore economic fruition to Costa Rican farmers.

Since the early 1980s Dr.Phillips-Mora has worked tirelessly from a modest lab in Turrialba to isolate naturally resistant and prolific cacao trees, and then hybridize these breeds to create original varieties.

After years of arduous work, Dr.Phillips-Mora released the first round of hybrids. Today there are six hybrid varieties that produce nearly three times more cacao than typical breeds and experience a low “five percent infection rate, compared to 75 percent infection for a control variety.” Not to mention, the crop yields good tasting chocolate. Dr. Phillips-Mora hasn’t traded quantity for quality—and states that good flavor is a requirement.

Today, CATIE hybrids are being used in all Central American countries along with Mexico and Brazil. For small farms in Costa Rica the clones are available for free. Before the monilia outbreak there were over 10,000 hectares of cacao in Costa Rica, today there are 4,500—but the number is growing. With the CATIE hybrids and new disease fighting techniques Costa Rica has the potential to comeback in a big way.

Dr. Phillips-Mora, cautions: these hybrids are not a panacea, nor are they a permanent solution. Plant pathogens and disease will evolve just as they did before; the important point is that the cacao crop can also evolve. Dr. Phillips-Mora is confident that the seeds already contain disease-fighting genes within their makeup. It’s simply a matter of isolating those characteristics and having those genes be expressed. With time and effort, it’s doable.