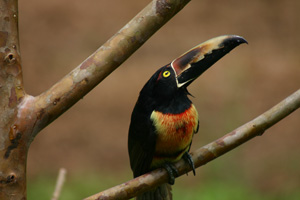 The collared aracari is a small awkward-looking toucan with a prominent enormously-oversized bill. It is fairly common throughout its 500,000 square mile Latin American range, and frequently seen at Selva Verde Lodge, where groups of aracaris often visit bird feeders and forage in local fruiting trees.

All 35 members of the toucan family occur exclusively in the New World tropics. There are 14 species of aracaris, all with slender bodies, richly-colored plumage and banana-shaped hollow bills. None of them are usually found far from forested areas, and most are generally encountered in groups of 6-16 individuals.

Collared aracaris seem to do everything in groups; foraging, loafing and even sleeping together. These birds are among the 16 species of Neotropical birds that have elaborate kinship behavior that includes cooperative care of offspring by non-parents. Research in Costa Rica

confirms nestling aracaris are attended by up to 6 adults; 2 parents and up to 4 non-breeding progeny from previous broods of those same parents. The non-parent “helpers” are regular care-givers, bringing food to nestlings and sleeping in the nest cavity along with the parents and nestlings.

It is a cozy relationship, characteristic of collared aracaris, and researchers think “helper” behavior chiefly involves non-breeders that have not achieved breeding age of two years. The helpers benefit by getting experience as food-gatherers before actually nesting themselves. As well, nestlings benefit from the attention of some many adults.

Collared aracaris nest in vacant woodpecker cavities, up to 90 feet above ground, usually in the main trunk or a large branch of an old tree. About 4 eggs are laid, which are incubated by both parents in shifts averaging about 25 minutes per parent. The young leave the nest in about 45 days. During the non-breeding period, the nest cavity serves as a group-dormitory for parents and helpers.

Aracaris are not really very vocal. They have several muted calls, and a piercing alarm “shriek”, but most of the time, they are fairly silent. They are rarely aggressive.The normal diet is fresh fruit, mainly Cecropia and palm, but they have a taste for bananas. Sometimes, they eat insects and small lizards.

The collared aracari is listed as a “species of least concern” by the International Union for the Conservation of Nature (IUCN).