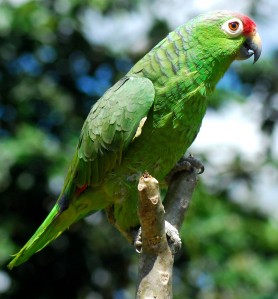 Sonographic analysis shows that many local vocal dialects occur within the total range of the species. These dialects are distinct and reflect the general reluctance of these parrots to venture far away from their home areas; consequently geographic vocal variance occurs within subgroups. The vocalizations are innate, but parrots that do venture into new areas rapidly learn the dialects they encounter and thereby avoid being shunned as outsiders.

Red-lored amazons (Amazona autumnalis) are about 14 inches long; the striking plumage is mainly green with red speculum, forehead and lores.

These are vigilant birds, and often quite nervous, spooking noisily at the approach of human or other intruders. But, in the Selva Verde area, most are quite approachable–except in the vicinity of nests. Recent studies confirm that one of the most critical factors contributing to the breeding success of this species is its overall shyness and wary aloofness, and in particular, its inconspicuousness around the nest site. Such behavior minimizes the chances that a nest will be discovered, and potentially destroyed by predators.

Parents approach nests stealthily and silently, often perching for long periods in distant trees before actually flying to the nest itself. As an added precaution, young are fed only twice daily: about 30 minutes after sunrise and about 90 minutes before sunset. If danger is present, parents often skip feeding bouts and studies show that young of this species are capable of going without food for up to 36 hours with no apparent physiological or nutritional problems. It is the price they pay for their parents’ diligence in not disclosing the nest-site location.

Nests are typically located in cavities high up in the trunks of tall, usually dead, trees, most frequently palm trees. The usual clutch size is 3-4 eggs which are incubated for about 26 days. Normally, the female-parent is solely responsible for caring for the young for the first 10 days after hatching; thereafter, the male-parent assists. The age of maturity in this species is about five years; the lifespan can reach 75 years. 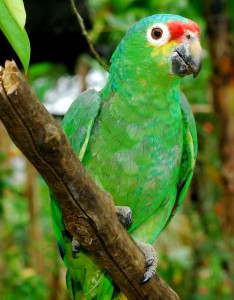 Red-Lored ParrotCommunal roosting is a characteristic behavior of this parrot, and recent research confirms a high degree of fidelity to roost sites, which are selected on account of their safety features. Some roosts host up to 800 of these birds. One study confirmed that pairs are much less likely to use their regular roost-sites during the nesting season, but that in the non-breeding period, counts at roost-sites provide a reliable estimate of the local red-lored amazon population.

These parrots prefer semi-open areas, forest edges and agricultural land; they tend to avoid large expanses of thick forest. They range from Mexico to Ecuador and Brazil, and within that range, there are four subspecies.

At Selve Verde, it is often most productive to look for red-lored parrots early in the morning, when pairs or small groups usually fly overhead and often perch to forage for fruit and seeds in nearby trees. They prefer palms, figs, legumes as well as some cultivated fruits (mangoes and citrus), as well as leaf buds.

In Costa Rica, there is a long history, among local residents, of keeping these parrots as household pets. They are considered family members and roost in the family living area; they are rarely kept in cages