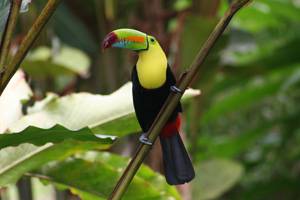 The keel-billed toucan (Ramphastos sulfuratus) is a spectacular species with a preposterously over-sized bill, and one of the most recognized of all neotropical birds. Measuring 20-25 inches in body length, it is one of the larger toucans.

Its rainbow-colored banana-shaped bill is its main distinguishing feature. The structure is actually hollow and comparatively weightless, its keratin skin shaped by slivers of bone. Despite its large size, the bill is used with great dexterity, to toss food items into the air; the head is then flipped upward so the food falls into the mouth. The main diet comprises fruit, the seeds of which are excreted whole; consequently, this toucan is an important disperser of forest seeds.

These birds are clumsy flyers, with rapid wing strokes interspersed with gliding. Since they are so awkward in flight, they tend to avoid being too far from cover. The forest canopy is where they are most likely to occur, often perched on leaf-less uppermost branches.

These are extremely social birds, usually encountered in groups of 6-12. Each group comprises an adult pair accompanied by several generations of offspring. These groups troop through the forest, foraging together. At night, they nest together in a cozy bundle, huddled together communally in a single chamber, usually a natural tree cavity or woodpecker hole. Such cavities are cramped, but the birds tuck their bills under the wings, and the tails are elevated, to conserve space.

Despite their spectacular appearance, these toucans have comparatively unimpressive vocalizations; mere frog-like croaks and dry rattles. 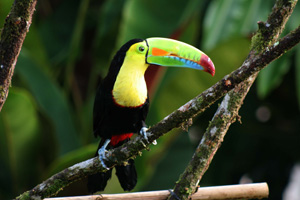 Keel-Billed ToucanMuch fundamental keel-billed toucan ecological research has been done in the Selve Verde area. Researchers found that the birds next high up in natural cavities or woodpecker holes located  on smooth branchless tree trunks. Adults are exceedingly wary of intruders in the nest site area and regular disturbance can cause nest desertion.

Researchers confirm both parents incubate the 1-4 eggs, averaging about 15 minutes per session. Incubation takes 16-20 days. The young fledge in about 9 weeks, but can remain with the parents for several years. Maturity is reached after about three years and the lifespan is about 20 years.

The entrance to the nest cavity is only about 3 3/8 inches in diameter, so adults much squeeze energetically and awkwardly through to enter.

These birds spend about 40 percent of their time foraging for food, seeking not only fruit but also insects, small lizards and bird eggs.

Pairs are monogamous and infidelity is apparently quite rare. Sometimes frisky males engage is bill-duels, the function of which is not clear.

Keel-billed toucans are commonly seen at Selva Verde, regularly foraging in ficus (fig) trees and shrubs. Early morning and late afternoon is the best time to see them.