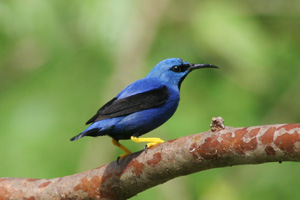 The shining honeycreeper (Cyanerpes lucidus) is one of two similar and strikingly-colored honeycreepers common in upper level forests and semi-open areas of Costa Rica. The bright yellow legs and feet of the shining honeycreeper are a primary distinguishing feature. At Selva Verde, it is most often encountered in pairs or small family groups.  Although its prominent curved beak is specialized for nectar feeding, its main diet comprises succulent fruit.

After pair formation, males of this species use song to stimulate females and to maintain the pair-bond. Often, song is used by both adults simultaneously, in duet fashion. Tests show that in this species, there is much individual variation in vocal components and local song dialects occur. The high degree of individuality in song is important for pair members attempting to maintain contact in thick cover.

These are very active birds, foraging energetically and acrobatically on fruit-laden trees and shrubs. Despite their sassy colors, they are so small (4 inches) that they are sometimes difficult to detect; often their thin high-pitched calls betray their presence before they are actually seen.

The diet is varied, predominated by fruit and nectar, but small insects and spiders are taken if available. Elaborate postures are often necessary to capture insects, including dangling from twigs or hanging upside-down while clinging to tree trunks.

Unlike the closely-related red-legged honeycreeper, this species rarely forms flocks. But, at Selva Verde, it often associates with tanagers at the bird feeders.

Taxonomists classify honeycreepers as members of the tanager group. The shining honeycreeper is sometimes considered to be a geographic race of the purple honeycreeper of South America.

The nest is a shallow cup fixed precariously to a thin horizontal twig. The breeding biology of this species has not been rigorously studied. The usual clutch is two eggs, but the incubation period and details on brood rearing are not clearly understood.