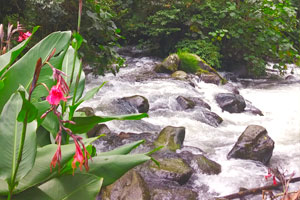 Just off the coast of Costa Rica, amidst the clear blue waters lies an often overlooked and under-protected natural phenomenon: the Costa Rica Thermal Dome. Discovered in 1948 by American scientists, it’s only recently — decades later — that research is beginning to understand its importance in regards to marine biodiversity and climate.

What is a thermal dome?

A thermal dome is a transient phenomenon, one that changes seasonally, and brings forth water with unusually high concentrations of nutrients, creating an ideal habitat for marine life. This happens by way of interactions between wind and ocean currents that result in the vertical displacement of deep, cold, nutrient-dense waters. When the water reaches the surface, it combines with sunlight to form considerable algae growth—the first link in the food chain. Algae growth means more food for zooplankton, which results in an increase in their population; this population explosion carries out successively up each link of the food chain (to species as large as the blue whale), ultimately creating a major resource hub in the sea.

Why is it significant?

The nutrient-dense water coupled with sunlight creates the perfect environment for proliferation of all kinds of marine life, including sea sponges, worms, echinoderms, mollusks and crustaceans, and even sea turtles. The dome also provides ample nutrients for larger marine life, like dolphins, sharks, rays, blue whales, swordfish, and even seabirds.

This upsurge of nutrient-dense water in a concentrated area gives rise to a positive domino effect, one that creates and supports marine life (specifically endangered marine life). Costa Rica’s thermal dome is considered one of the richest places on the planet.

Coming together for a cause:

Costa Rica’s thermal dome sits north of Costa Rica’s Pacific coast (in the Papayago area), and spans approximately 900 by 300 miles. It is one of five thermal domes in existence, but it is the only upwelling that is constant, making this region incredibly unique and invaluable in terms of ecology and biodiversity.

Because the dome is a mobile phenomenon, affected by wind and ocean currents, for six months of the year it is blown further out towards the high seas; and although its core is located in Costa Rican waters, portions of it extend into Nicaragua, El Salvador, Guatemala and Mexico. Additionally, many of the animals that frequent the dome migrate from thousands of miles away. People interested in protecting the ecosystem face some major obstacles: how do you safeguard an environment that moves, changes in size, exists in multiple jurisdictions, and supports transient marine life?

Costa Rica is doing its part. With the help of MarViva and other organizations, the Costa Rican government has declared the upwelling system off the coast of Papayago and surrounding areas an Ecologically or Biologically Significant Marine Area (EBSA). This declaration makes protection of the region mandatory.

Furthermore, students from the University of Costa Rica and the National University of Costa Rica joined a multi-organizational expedition to the Costa Rica Thermal Dome. Lead by MarViva and Mission Blue, the research trip included scientists from organizations like Global Ocean Biodiversity Initiative (GOBI), the National Oceanic and Atmospheric Administration (NOAA), and more. The overall goal of the expedition was to learn more about the dome, the animals that frequent its waters, and the potential threats (i.e. pollution, shipping, and fishing) to this vital ecosystem.

Although science is just beginning to understand the intricacies and implications of the dome’s impact, and forging an international unified conservation plan will present difficulties, one thing is clear: this region needs to be protected and preserved.