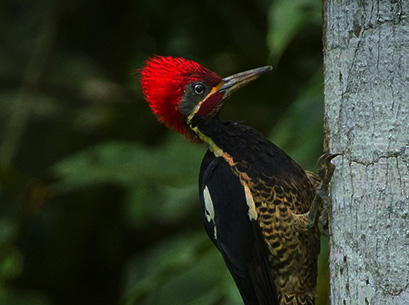 The Christmas bird count began in 1985. It has an area of 452 square kilometers. In this first count reported 290 species and 5,792 individuals. Central point of the circle whose radius is 12 km., is the Post Magsasay 2.7 km to the south on the Peje River. With the good participation of bird lovers and with A rainy day in the morning and a sunny day in the afternoon are achieved quantify a total of 338 species and 6,613 individuals in the entire counting circle.

Due to Covid19, this year some routes were removed and the number of accountants in the groups following the protocols for avoid contagion. A new species is added to the list: Parula America (Northern Parula), this species was observed in the Bijagual Reserve; reaching a total of 542 species accumulated in all count.

With a total of 95 national and foreign participants representatives of various institutions. 20 organized group to travel various established routes within La Selva in the Puerto Viejo and Sarapiquí rivers, refuges and shelters such as: Puesto Ceibo and Albergue 1070 in P. N. Braulio Carrillo, Selva Tica Rara Avis, La Tirimbina, Bijagual, Lapa Verde Selva Verde and surrounding roads of the station.

The effort of all these participants represents a total of 187 hours of observation and 350 kilometers walking, by car and by boat. Thanks to your dedication to the birds and the collaboration of all of you we have managed to reach the Thirty-Seventh Count, allowing us to be part of one of the oldest in the Neotropical, and thus be part of a database of enormous value for the conservation of our birds tropical.